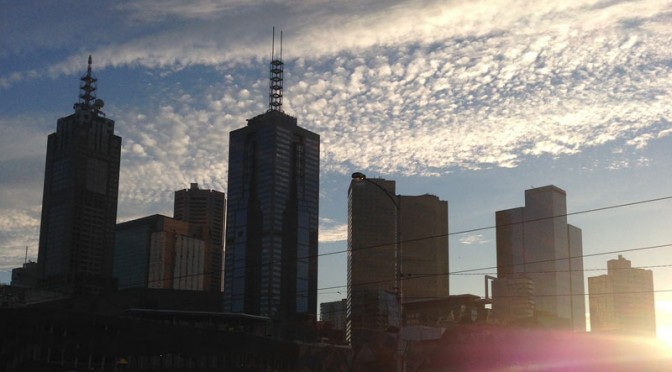 Rule number one was my own creation and I’ve been cursing my foolishness ever since December started. (I just put Kraftwerk’s hip-hop inspiring Trans-Europe Express on the turntable.)

Last year Beyoné’s Beyoncé was released on 13 December. This, I have recently learnt, is an anomaly for powerful releases. Very few artists release records in December or the first couple of weeks of January. December is for "best of…" compilations and rarity collections that work as great stocking stuffers but terrible if one is trying to escape nostalgia.

In the last four weeks, when people started presenting their favourite records of the year, I discovered Run the Jewels 2 and cursed myself for not making the rule "from the last quarter of 2014".

There are so many films we haven’t seen, why do we need to watch Can’t Hardly Wait for the fifteenth time? So they don’t have to be new films but they do have to be new to us. There’s a copy of The Seventh Seal on our shelf waiting to be watched.

This is more for Lyndal than me. She reads a lot. I read so slowly that I don’t really have time to go back. Lyndal will re-read something because she doesn’t remember a detail when discussing it with friends. I do, however, take comfort in revisiting comic books when I just want to switch off and relax in the comfort of characters and dialogue I remember loving.

That’s not going to happen anymore. Not for a year at least. I have only a few more days if I want to smile at that last page of The Killing Joke.

There are series I want to see again. The Shield has recently been in my mind to rediscover the journey of every mistake leading to the next. I make academic excuses about needing to learn the nuance or something. It’s bullshit. It’s a combination of laziness and settling for comfort because the alternatives are too much work.

(Free Kitten’s Sentimental Education is spinning around the turntable now.)

I toyed with the idea of refraining from ordering the food I’m most comfortable with at my favourite restaurants. Then I thought about going a year without the lasagne at Pellegrini’s. Instead I will try to just be mindful about trying new things when perusing the menu.

Clearly, though, the most difficult part for me will be the new music. Lyndal has an expanded opportunity to just not listen to any music written in the last 100 years, aka the Mahler Clause.

We talk about the project a lot and the music we’ll miss most. We’re not pretending it’s going to be easy.

Next up: Where is new music?